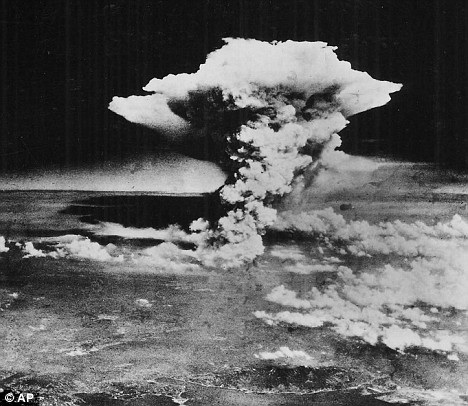 Atomic bomb blast on Hiroshima on August 6, 1945. The atomic bomb was the beginning and center of an arms race that threatened to destroy human civilization, and was a big factor in the upcoming Cold War. 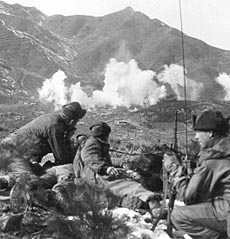 UN troops drop white phosphorous on a Communist-held post in February 1951. The Korean War, although a violent stalemate in itself, with the clash between General MacArthur with the US and UN forces, and the North Koreans backed by the Chinese, ended up making the United States much more militarizes, through NSC-68. 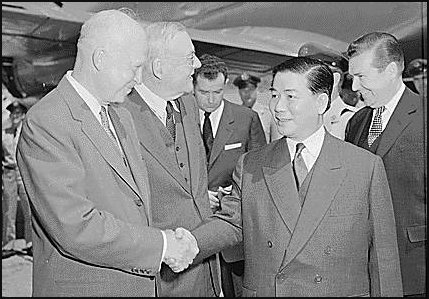 President Eisenhower and Ngo Dinh Diem, at the Washington National Airport in 1957. Although the United States at first had propped up President Diem's corrupt regime in South Korea, they eventually realized he had very little popular support in Vietnam. 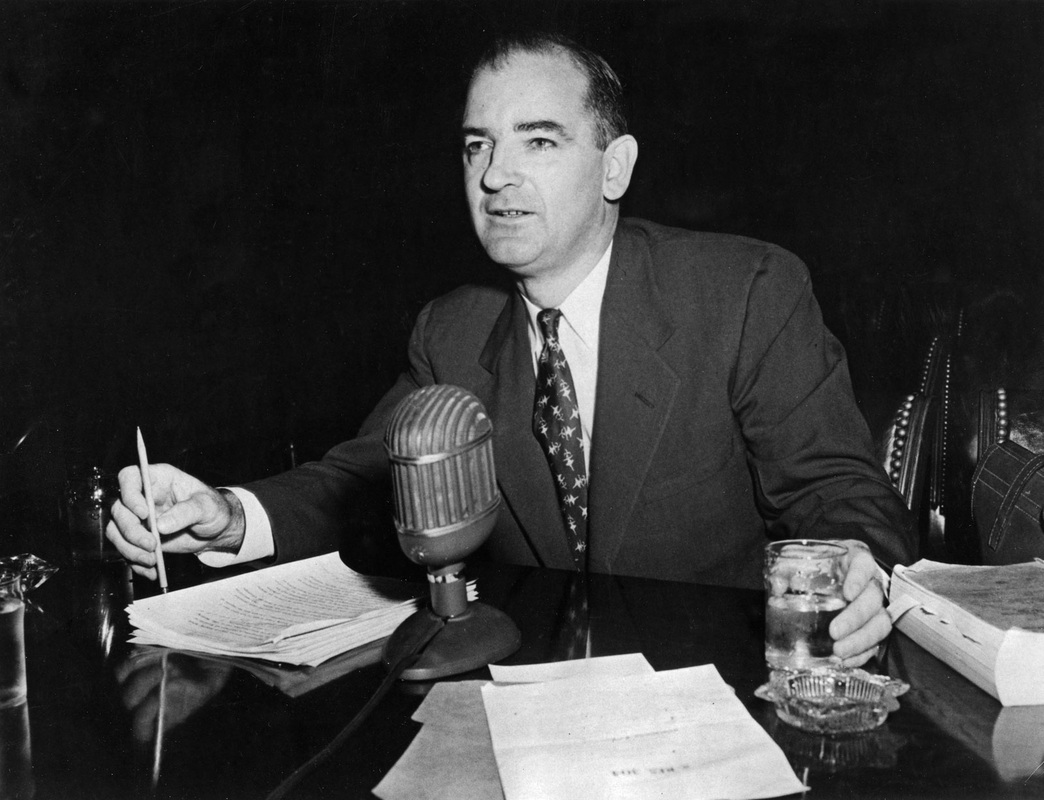 U.S. Senator Joseph McCarthy testifies before a Senate subcommittee to accuse other senators of being communists. He blacklisted many public figures without evidence of their being communist, creating a "witch-hunt" mentality in the government and in American society at that time. 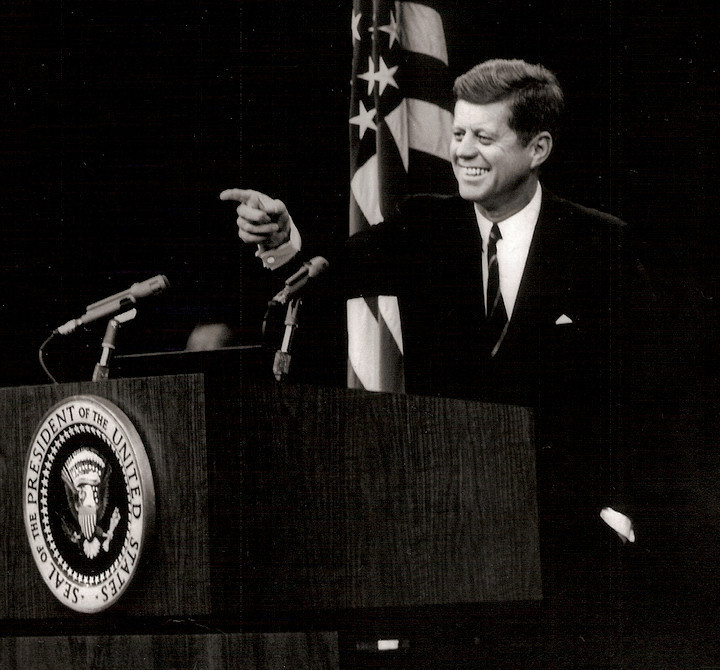 Five days after his inauguration in 1961, the President holds a televised news conference from the State Department auditorium. He is charismatic and over by reporters and also by the American public. 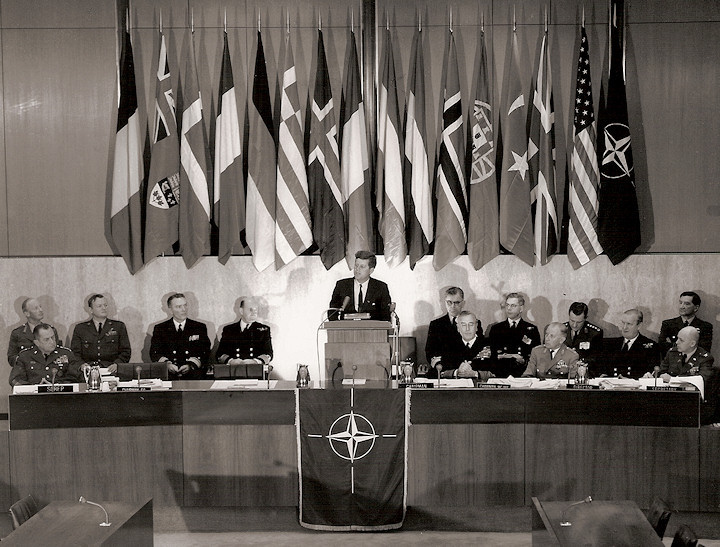 JFK is addressing the NATO chiefs of staff at the State Department, pledging a strengthening of nuclear and conventional armed forces. 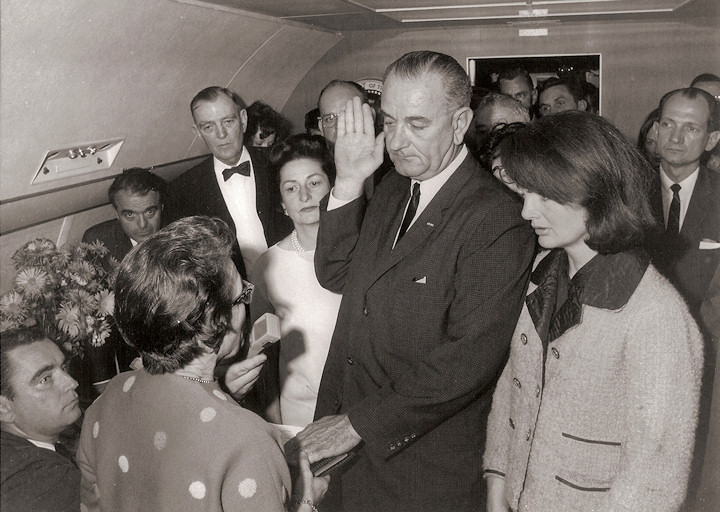 Lyndon B. Johnson is sworn in only hours after JFK's assassination,on November 22, 1963, in an airplane. The plane was used shortly after to fly President Kennedy's body out of Texas. 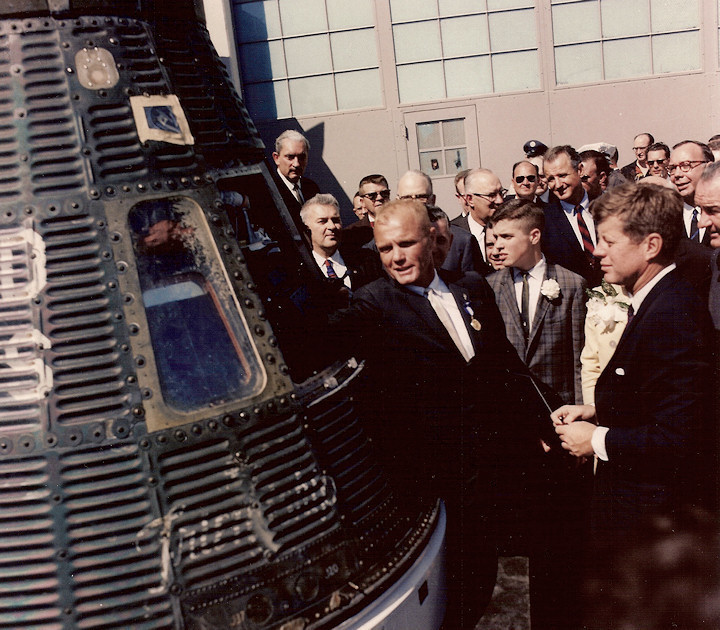 John Glenn, astronaut, shows the President a space capsule. Glenn had traveled into orbit and circled the earth three times in that space capsule. The space program, in addition to being a scientific adventure, also had military undertones, as the technology used in space travel could also be used in ICBMs and other dangerous weapons. 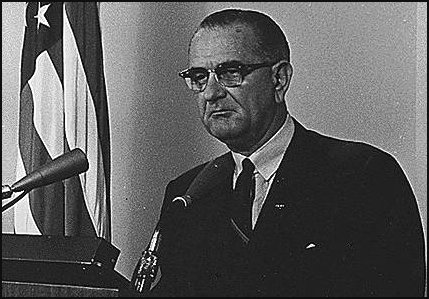 LBJ's "Midnight Address" which announced a U.S. bombing raid in August 1964. The President had much support after the 2nd Gulf of Tonkin incident, where US Navy ships were fired upon off the coast of North Vietnam. Although the claims were dubious, the public and congressional opinion were stirred to give the President a virtual blank check for military spending and actions. 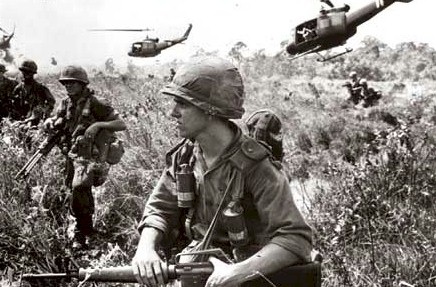 The Vietnam War lasted from 1957 until 1975, and came with many economic, political, and ethical problems. The war spending was a major factor in the downfall of LBJ's social programs, the "Great Soceity," there were many student and draft protests against the war, and events such as the My Lai massacre and the secret bombing of neutral Cambodia made the US public question their involvement in an ultimately unpopular fight. 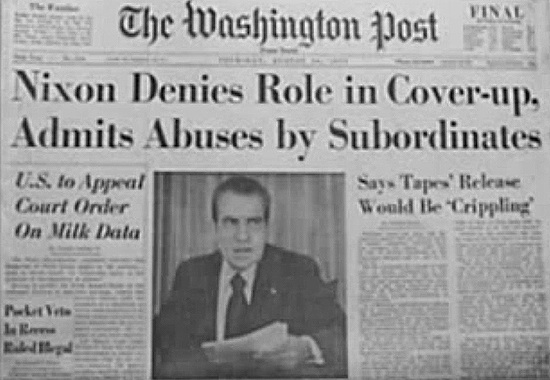 The Watergate scandal has defined American politics in Nixon's presidency, and even all of the Cold War era. The bugging and cover-up disgraced Nixon after he was implicated in it, it lessened the prestige and respect of America and its fundamental ideals around the world, and it also brought in two Presidents, Jerry Ford, who was selected as VP after a separate scandal, and made President after Watergate, and Jimmy Carter, who ran as an outsider Democrat against the memory of Watergate. 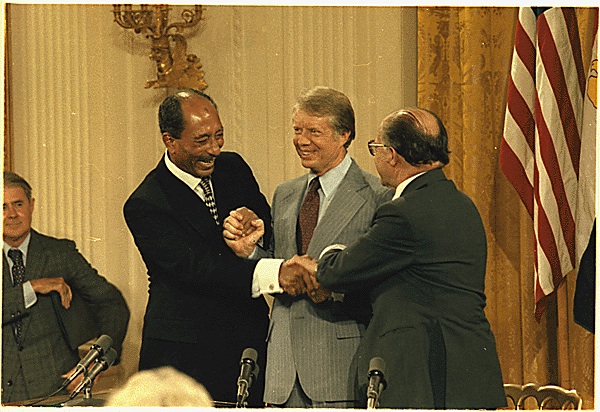 Anwar Sadat, Jimmy Carter and Menahem Begin, signing the Camp David Accords, on 09/17/1978. These accords brought temporary peace between Israel and Egypt, and restored pre-1967 borders to that region. The Accords were only one of many humanitarian actions done by Carter during and after his presidency. 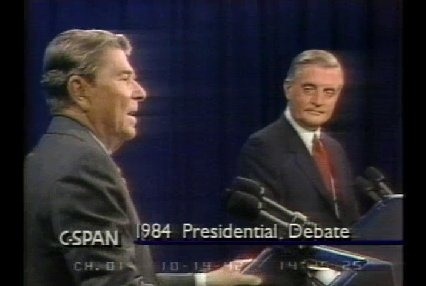 Reagan was loved by the American people, and he was successful in his first term in reducing social spending and lowering taxes, but he did spend heavily on the military. As a former actor, he was comfortable on TV and did very well in his second election against former VP Walter Mondale, winning the electoral votes 525-13. Reagan rose on a revival of conservatism to power, based on moral values and religion that became politicized, just as with the liberal movements of the 1960's. 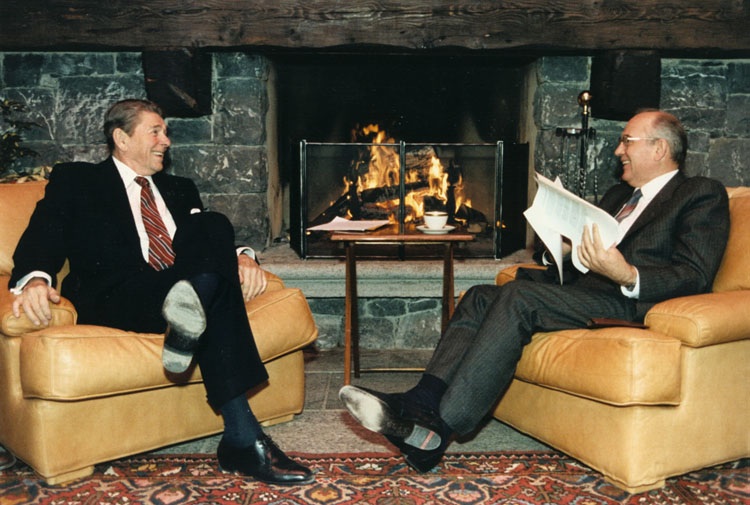 Nixon and Gorbachev meet at a peace conference, one of several during which an anti-INF treaty was signed, and the Soviet Union became more democratic and capitalist under glasnost and perestroika. 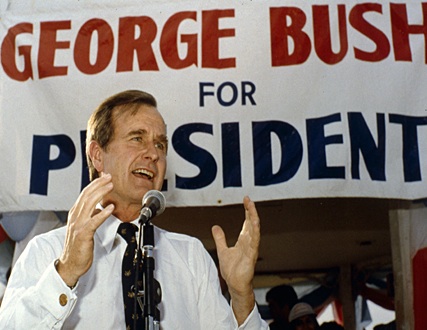 George H.W. Bush was elected president after a career in the executive branch of government. He was elected by Reagan supporters and the tail end of the rise of conservatism. Although he was president during the first, very efficient and effective Gulf War, the end of his presidency was marked with economic troubles.