American Identity in the American West

By the 1890's, the American western frontier was closed and the American West was being settled. The great, empty plains were being fenced in by homesteaders. The Native American tribes, which had lived in those areas were displaced and sent to reservations, and the hordes of buffalo were being killed and slaughtered, in part to help destroy the Native American tribes. White settlers, often immigrants or people needing a new start, seeking a settlement or fortune, were heading west for cheap land to farm or prospect. Soon after, industry followed, starting with the railroads. As more and more transcontinental railroads were built with the labor of Irish and Chinese immigrants, civilization followed and cities sprung up along the rail lines. The initial settlers were primarily family farmers headed out on wagons in large groups to find new lands to claim as a homestead. They arrived at some of the most beautiful scenery in the continent, with vast plains, deserts, and giant mountains, unknown to most easterners. They also found some fertile earth in the Midwest and California, among other places, but they also found desert and other hard to farm land, and had to resort to dry farming and irrigation, a factor leading up to the dust bowl decades later. The later settlers were railroad workers and big mines, interested in gold, steel, and other minerals. When the railroads and other big industry came, the mines and some farms became more factory like themselves, using bigger machinery and a more efficient process. However, this shift showed an end to the freedom and independence of the earlier settlers and the previous American mindset of a land of greater opportunity in the West. 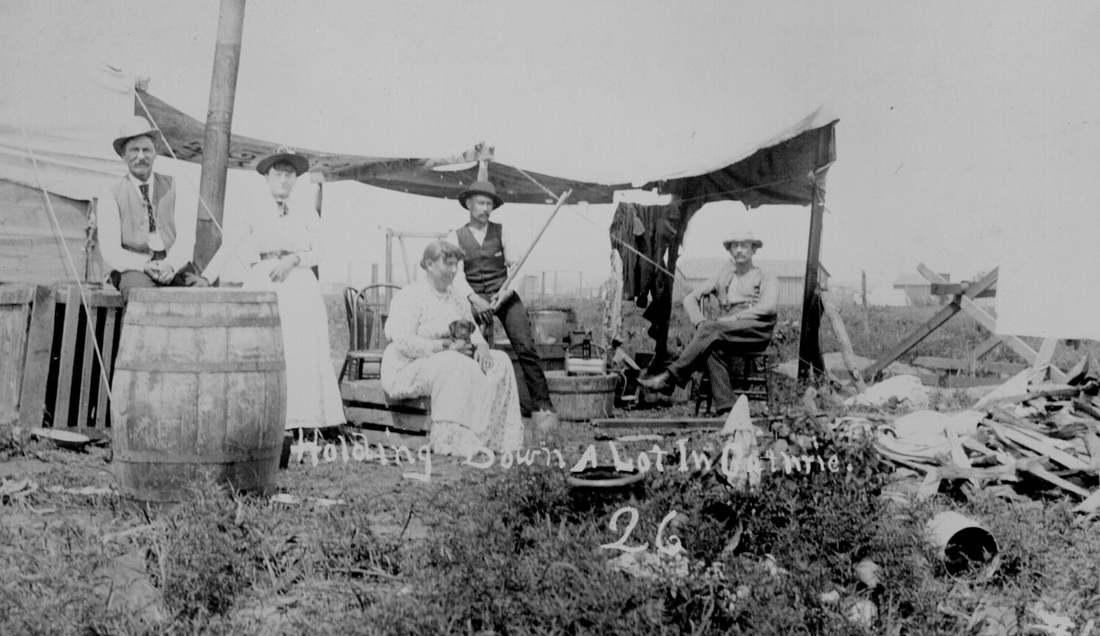 "Holding Down A Lot In Guthrie" showing the basic settlement of some homesteaders. Photographed C. P. Rich, ca. 1889. 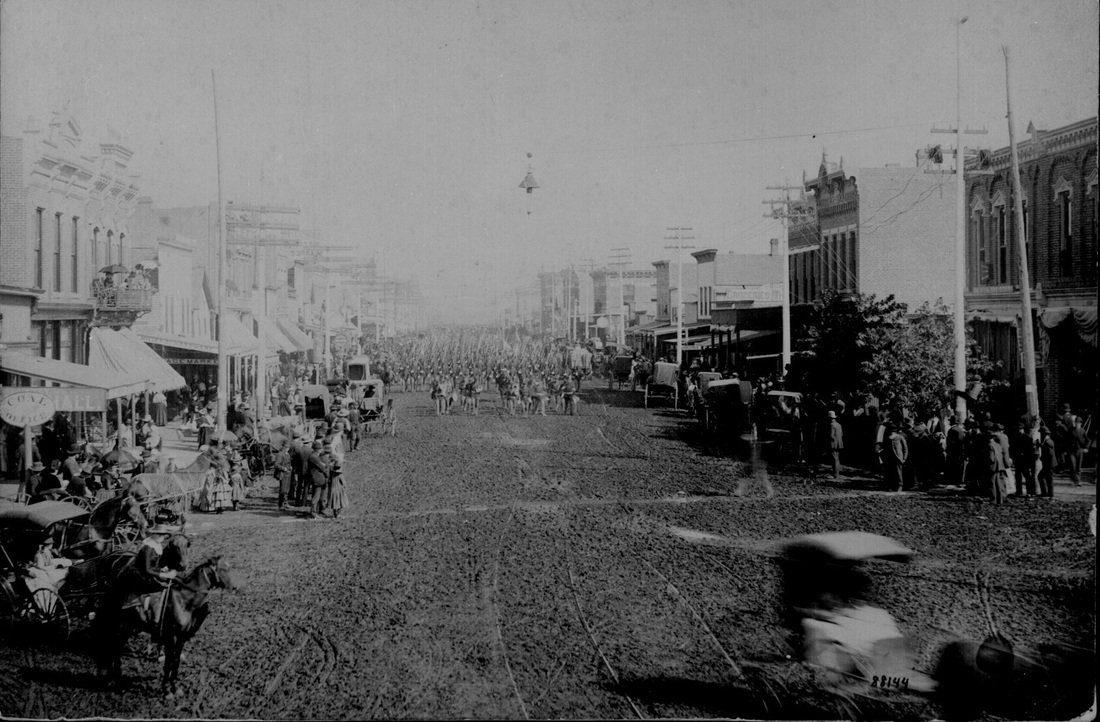 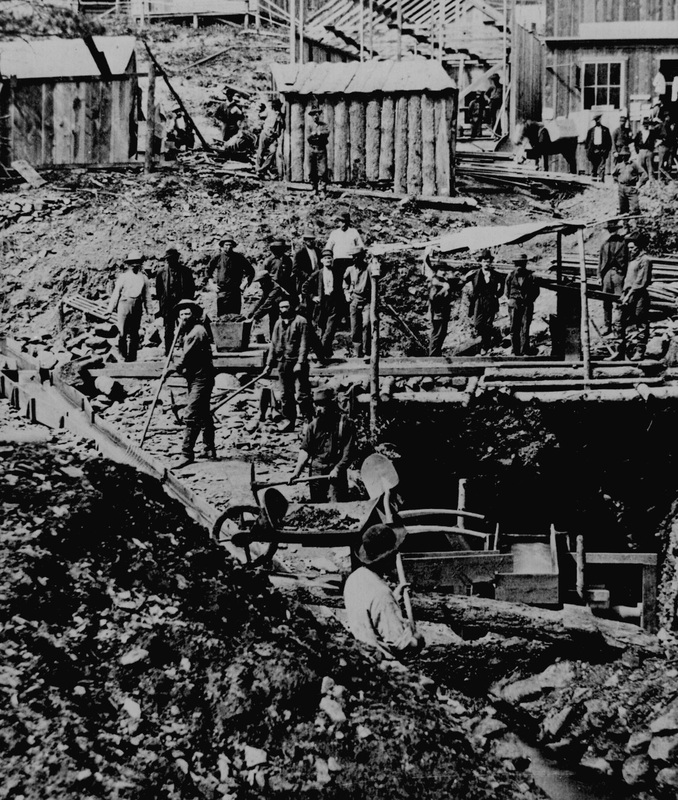 "Mining crew drifting for gold below discovery point" Mining was one of the biggest industries of the American West. In Deadwood, Dakota Territory. Photographer S. J. Morrow, ca. 1876 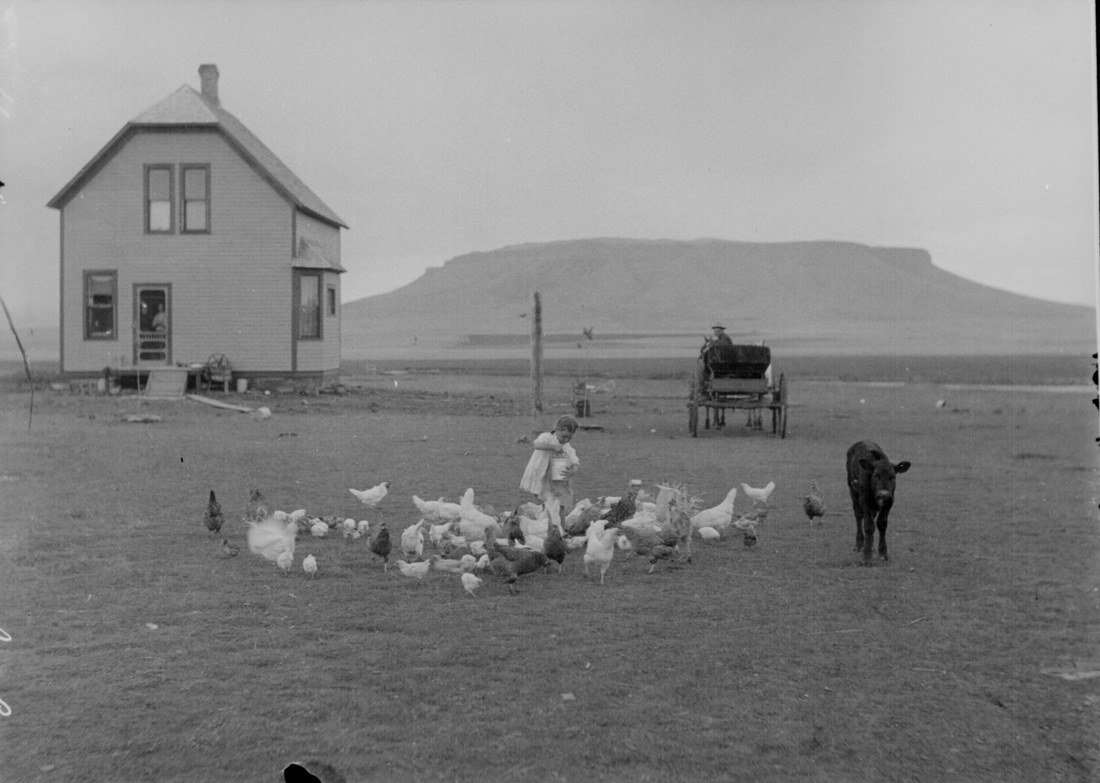 "Hancock homestead" A homestead in the midst of beautiful scenery. In Sun River, Montana. Photographed by Lubkin, June 23, 1910 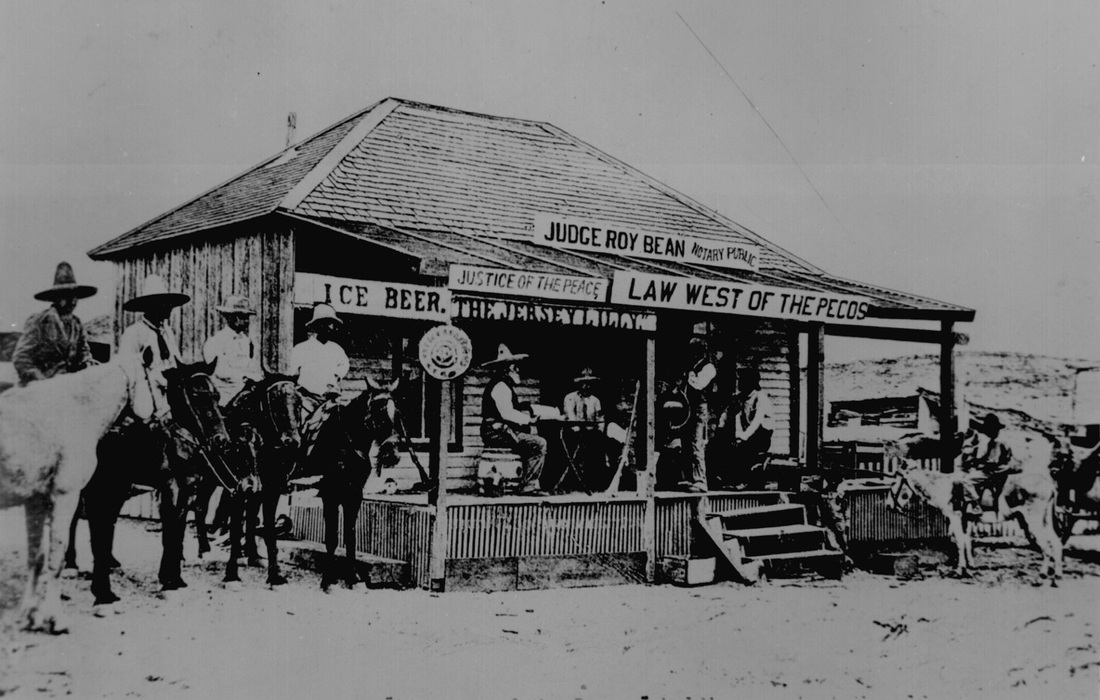 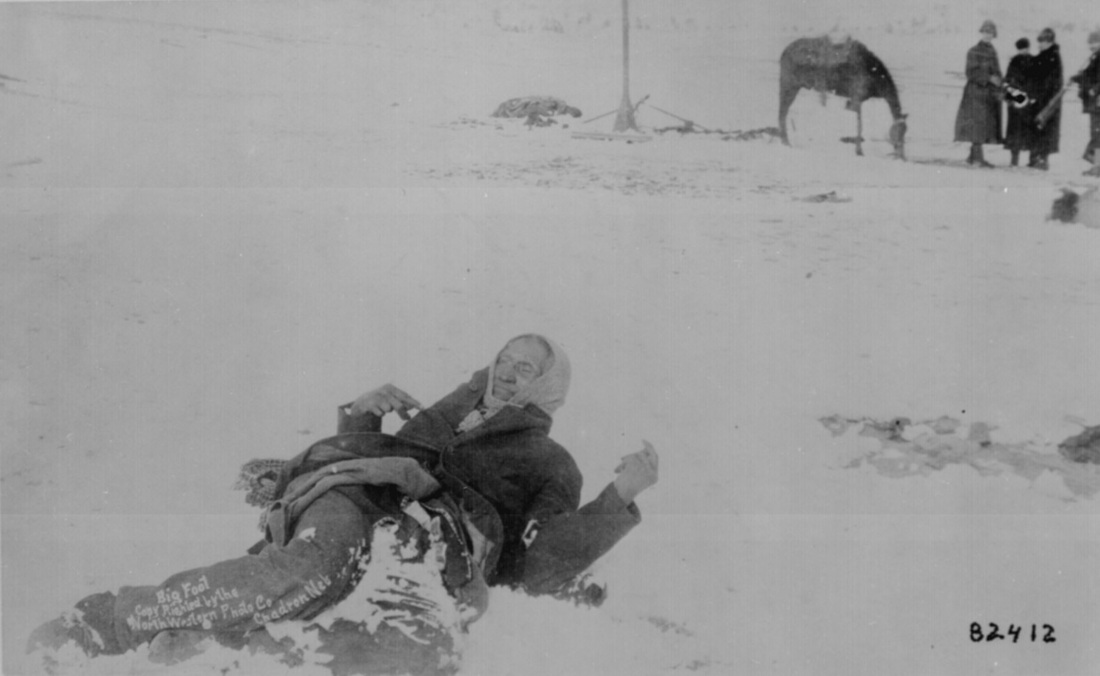 "Big Foot, leader of the Sioux" He was captured and died at the battle of Wounded Knee, South Dakota, marking the end of major Native American conflict after about three hundred years. 1890. 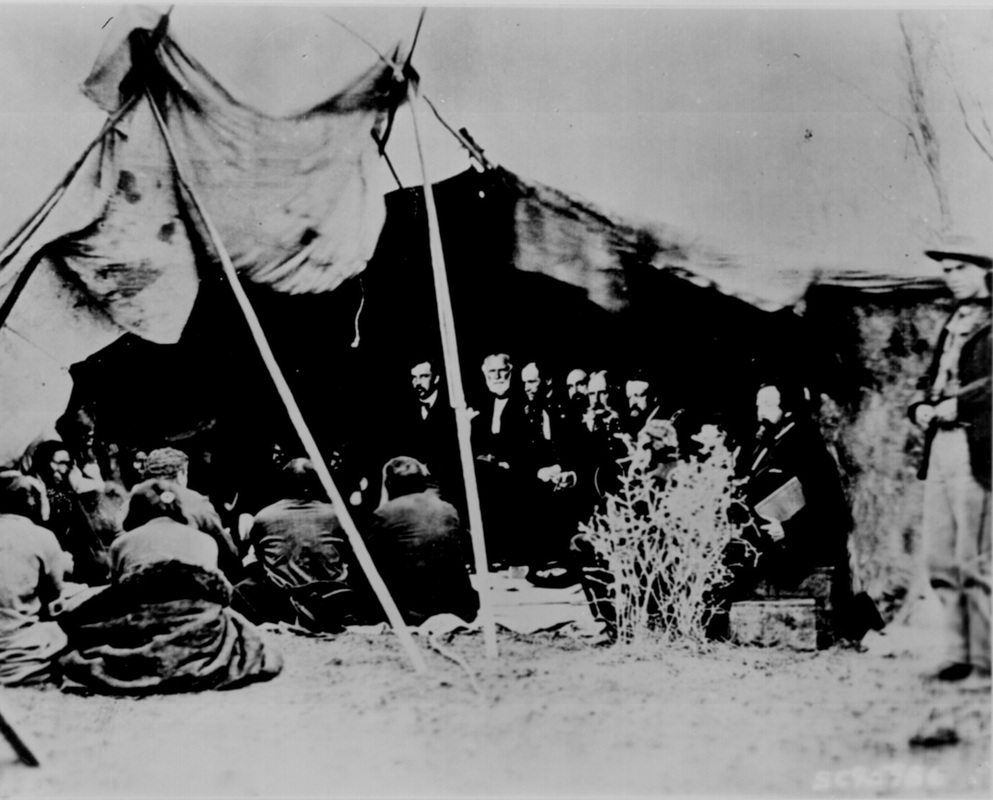 "Gen. William T. Sherman and commissioners" Here he is speaking with Indian chiefs. He was an ex-Union General, sent West to fight the tribes out West. At Ft. Laramie, Wyoming. ca. 1867-68 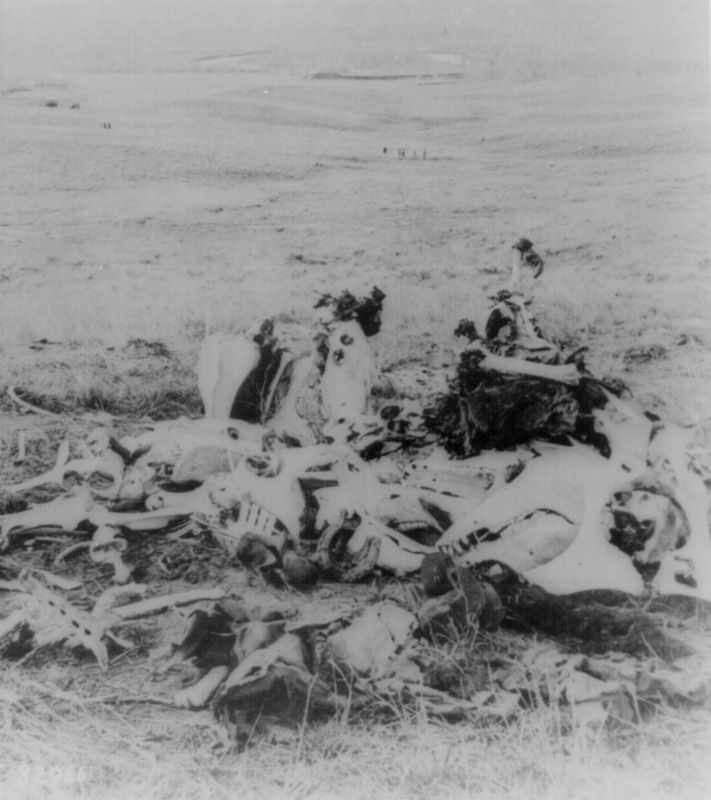 "Scene of Gen. Custer's last stand" The Battle of Little Bighorn was Custer's last stand, which, although it was the result of tactical errors by Custer, resulted in his martyrdom and more violence towards the Native Americans. ca. 1877 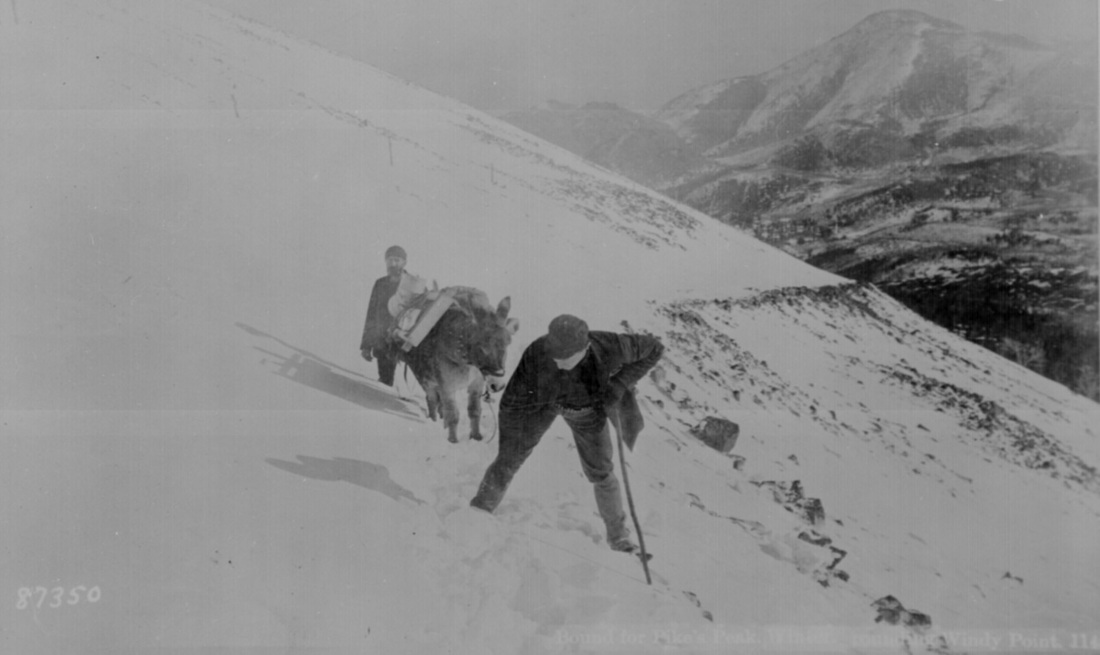 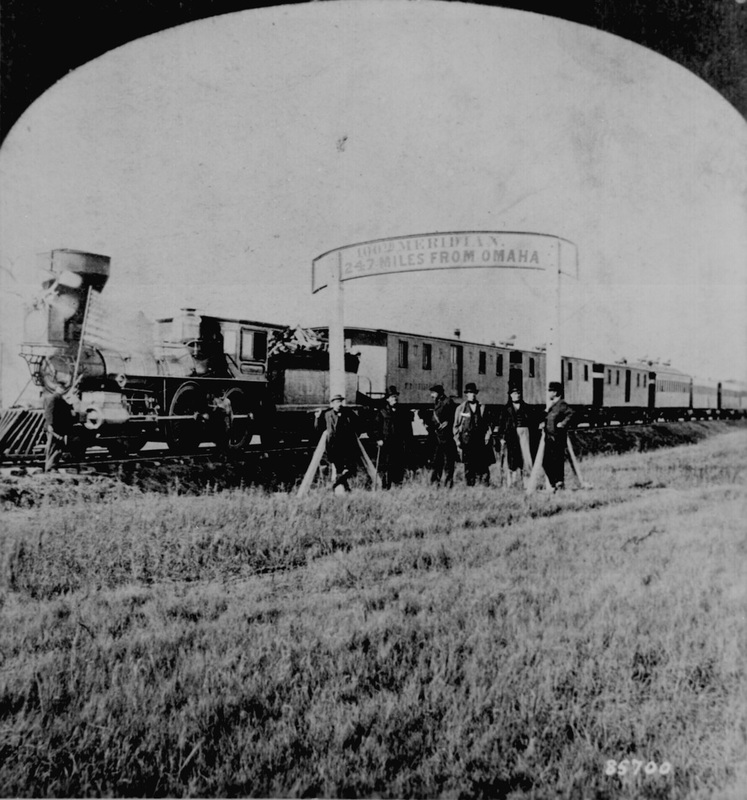 "Directors of the Union Pacific Railroad"  The train has come 247 miles west of Omaha, Nebraska Territory. Important, powerful, and influential people were invited by the railroad executives to see the railroad, showing its importance. By John Carbutt, October 1866 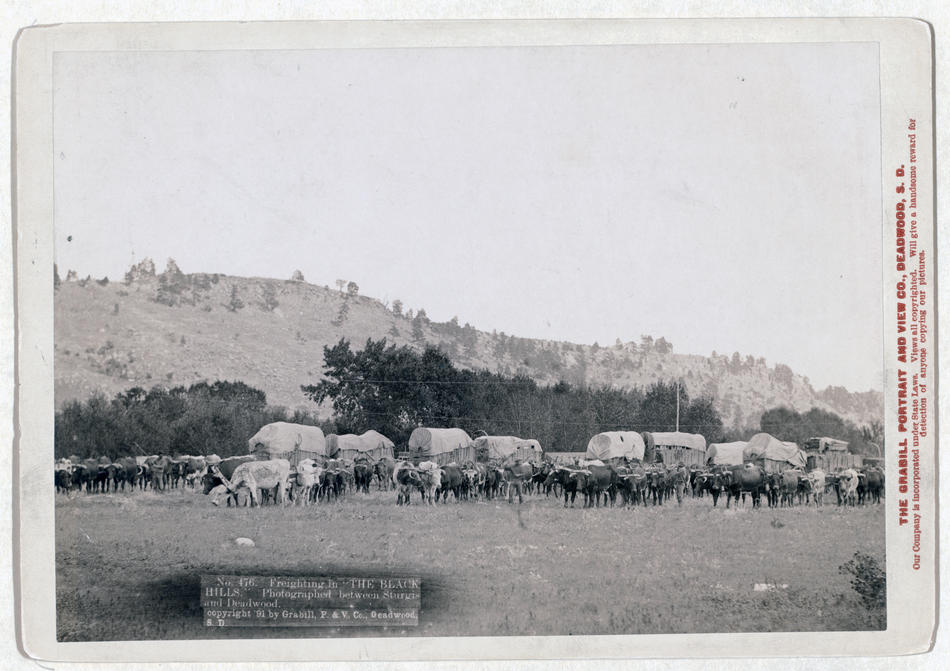 "Freighting in 'The Black Hills'" Showing ox trains, a common means of heading west with supplies. Photographed between Sturgis and Deadwood, in South Dakota. 1891. 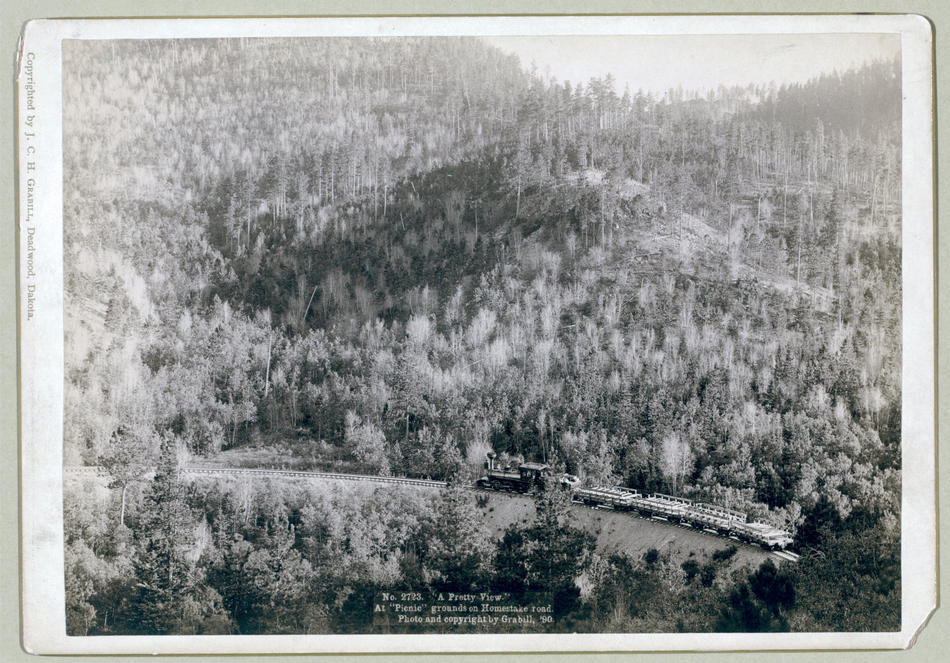 "A pretty view." View of a train engine and cars, the most important factor in settling the West. Photographed from Homestake Road, 1890. 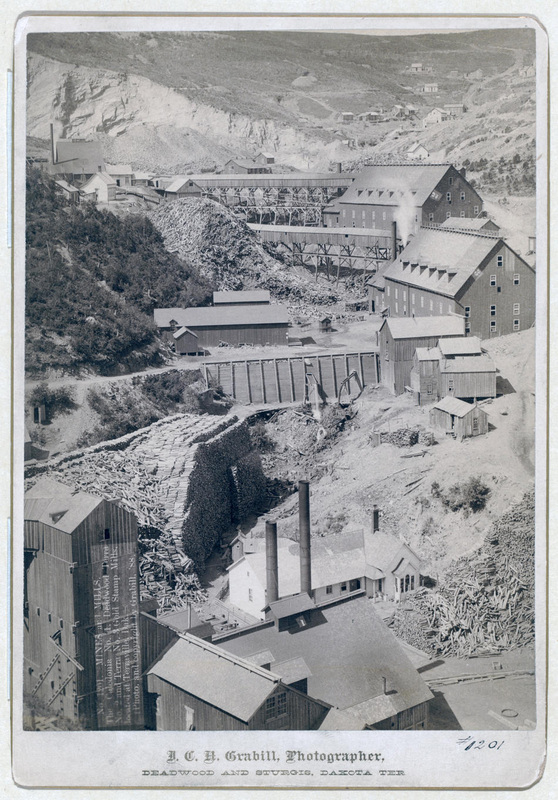 "Mines and Mills" The Caledonia No. 1, Deadwood Terra No. 2, and Terra No. 3. Gold Stamp Mills. Lumber was also an important industry in bringing people and civilization West. Photographed at Terraville, Dakota Territory. 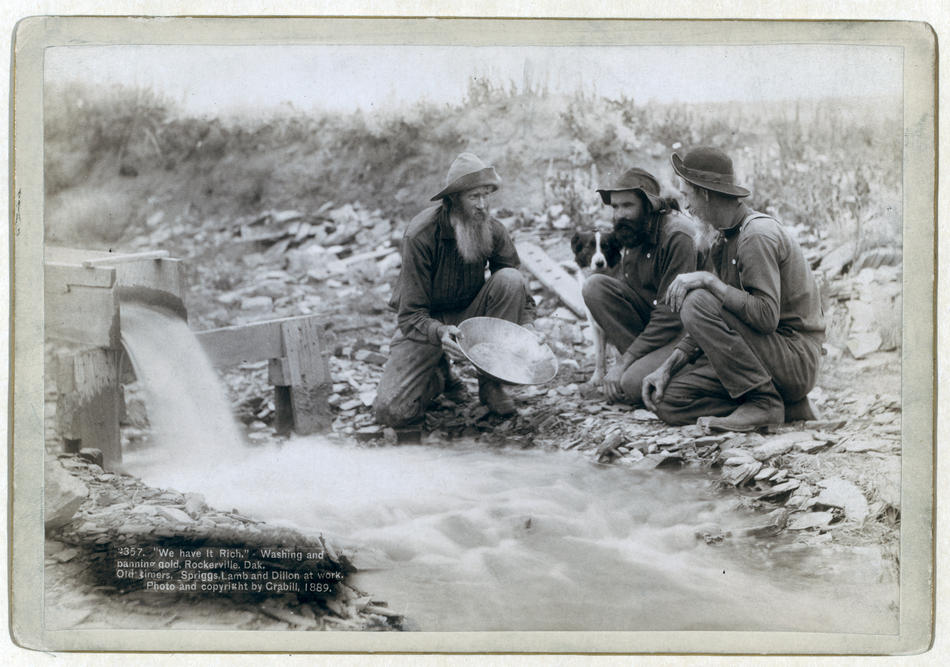 "We have it rich." Many poor immigrants and other Americans, with little or nothing to lose, or else drawn in by the chances of striking it rich, went West to prospect for gold. Some did make fortunes, but many others failed to find anything. Photographed in Rockerville, Dakota Territory, in 1889. 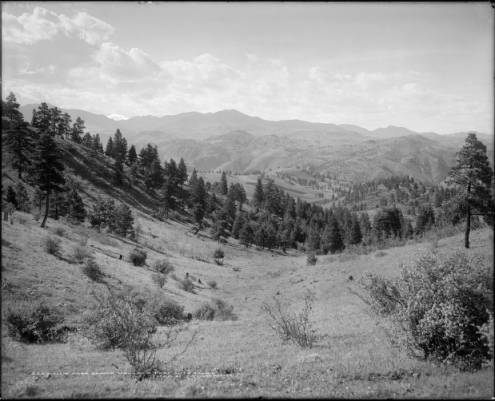 "View from Denver Mountain Park Auto Road" ; One of the beautiful landscapes of the American West, showing a valley, trees, and 14,260-foot Mount Evans, one of the snow-capped Rocky Mountains. Most of those headed West saw these types of views for the first time, so much greater than the scenery of the Eastern United States.  Photographed in Colorado, by Louis Charles McClure, 1867-1957.